Laguna de Apoyo is a lake inside the caldera of an extinct volcano. It is in the provinces of Granada and Masaya with the province border crossing through the lake. 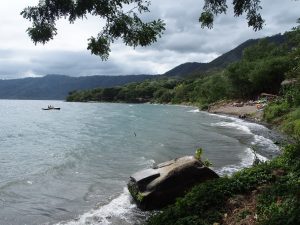 It’s a fresh water lake with a volume of approximately 2.58 cubic kilometres, and surface area of just under 21 square kilometres. It is 6.6 kilometres in diameter and 175 metres deep.

Laguna de Apoyo was declared a nature reserve in 1991, and is a popular place for people to visit for both day trip and a few days away. Many people with limited time visit as a day trip from Granada, but those with more time tend to stay a night or two.

Our stay at Laguna de Apoyo

Arriving in Managua at 10pm, we had organised an airport pickup to take us straight to our accommodation at Laguna de Apoyo, and we started out vacation with two days on the side of the lake. 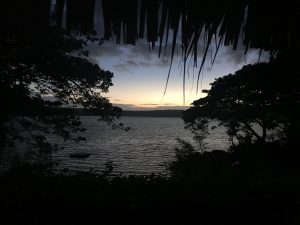 This was a brilliant way to switch from work mode to holiday mode. We arrived at night time, tired from travel, and we woke up to blissful calm. We watched the sunrise; easing into the day listening to the birds chattering, the howler monkeys howling in the distance and the wind lightly rustling through the leaves of the trees.

No matter where you stay by the lake, all accommodations provide kayaks and inner tubes for enjoying time on the lake. Some accommodations have a pontoon to which you can swim out and then enjoy the sunshine. The accommodations also typically have hammocks and beach chairs, some also have barbecues and picnic tables at your disposal.

We had a great time paddling around in the kayaks and lazing on the pontoon.

In addition to enjoying the water activities, you can walk along the waters edge to check out other accommodations, restaurants and quiet spots to soak up the scenery. I believe there are some hiking trails in the area and that the view from the crater rim is spectacular, but we didn’t get to either of these things. For those who dive, there is also lake diving.

There are several accommodation options by the lake and on the crater rim. We chose to stay on the Granada side of the lake, by the water at a place called The Monkey Hut.

The Monkey Hut is a great spot for peace and quiet, there weren’t many guests there and it was a very relaxed place to be. A dorm bed cost USD$16.10 per night, and includes coffee, tea, purified water and the use of kayaks, inner tubes, pontoon, hammocks, beach chairs. I made the booking via email and WhatsApp.

We loved the Monkey Hut for the peace and quiet, but if you are travelling solo or are a bit more social, then neighbouring Hostel Paradiso would be my recommendation.

The only downside of The Monkey Hut was the food. They did have a restaurant, but it was not on site, food was delivered plastic wrapped and the price/quality wasn’t amazing. Paradiso however was fantastic, with a huge range of options. It was a 3-5 minute walk between the two sites. At Paradiso we were able to get a day pass for free in order to make use of the restaurant (if you want to use the swimming facilities – kayaks etc. then you need to buy a day pass for USD$6)

We travelled to The Monkey Hut direct from Managua airport with a private transfer organised by Monkey Hut for USD$40 fo two people.

On their website Money Hut have directions for how to get there by car, taxi, shuttle or bus from Managua, Masaya and Granada.

Making use of the daily shuttle from Hostel Paradiso, we paid USD$3 per person for the ride to Granada. The shuttle goes between 3-5 times daily. Their website also provides some transport directions.

Nicaragua has been on my “To See” bucket list for some time, so when a cheap flight popped up I had to jump on it. I then explored Nicaragua for 3 weeks with my partner.

Extended posts on each of our Nicaraguan destinations to follow.

A loop around Nicaragua 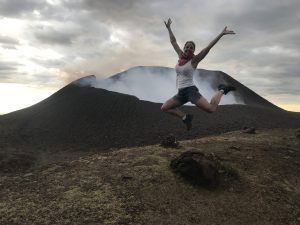 Our three weeks in Nicaragua took us in a clockwise loop around Nicaragua and ending with a trip out east to the Caribbean.

We flew into Managua, but being a big city and having heard negative things about it, we arranged an airport pickup to take us straight to Laguna de Apoyo.

A visit to Laguna de Apoyo was the best way to start our trip, by giving us time to slip into holiday mode relaxing by the lake. (2 nights)

From Laguna de Apoyo we headed south to the colonial city of Granada, where we explored the city and neighbouring natural sights such as Volcan Masaya and Las Isletas. (2 nights)

From there we travelled further south and a little east to Isla Ometepe in Lake Nicaragua, where we completed the steepest hike in Nicaragua, up Volcan Concepcion. (3 nights) 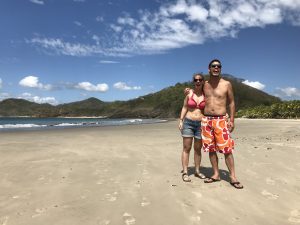 The next destination was our most southern stop, Playa Maderas in the San Juan del Sur region, to enjoy some time by the beach. (3 nights)

We then headed north to Leon, in order to hike Volcan Telica and surf down the slopes of Cerro Negro. (3 nights)

From there we went to the coffee region of Matagalpa in the north-east, but when we found it wasn’t what we had hoped for we returned to Leon. (2 nights)

From Leon we bussed down to Managua in order to fly to the Caribbean for some days of sun and snorkelling on Little Corn Island. (4 nights)

To finish the trip we spent the last days in Granada writing postcards, and people watching by the plaza. (2 nights)

Including flights, accommodation, tours, food and everything else we spent under €3000 for two people for 3.5 weeks including travel time. While the national currency is Cordobas, Nicaragua makes extensive use of the US Dollar. You can pay in either currency, but you will notice that the majority of prices are listed and quoted in US Dollars. Whenever bargaining, be sure to check what currency you are discussing!

We flew with United Airlines from Amsterdam to Managua return for €330 per person when a cheap deal came up online through TicketTippers.

The flights from Managua to Big Corn Island are through the regional airline La Costeña. We booked with a travel agent in Leon at a cost of USD$195 per person return, however if you book on the phone directly with the airline the cost is around USD$165.
Note: if you book online it is around the same price as a travel agent, but fewer of the flight times are available for booking. 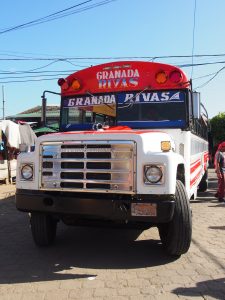 We predominantly travelled by Chickenbus and Microvan (UCA), where prices range from USD$1 to $3 for trips up to 3 hours.

Taxi’s anywhere can be ridiculously expensive as the drivers try to rip off the tourists. I have been scammed out of $15 for a 5 minute ride. Try to take Taxi Colectivo where possible as they will also pick up additional passengers and it brings down the cost for everyone.
Note: there are pirate taxi’s you need to be aware of. When taking a taxi check that the number plate has horizontal striped colouring Red, White, Red. Official taxi’s have these plates, and usually also the ‘Taxi’ bubble on top of the car. I also always take a photo of the licence plate before I get in and ensure that the driver see’s me doing so.

We mostly stayed in hostel dorms that we booked through HostelWorld paying between USD$6 and $14 per bed.

On a few occasions we splashed out for a private room, which we booked via booking.com paying between USD$19 and USD$30.

We occasionally booked rooms by sending WhatsApp or Facebook messages directly to the accommodation. This was typically a great way to find availability and costs for places not listed on the common booking sites. 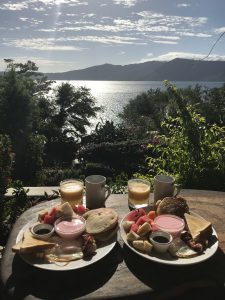 It depends on how adventurous you are with food as to what your food budget is likely to be. We enjoyed some street food, as well as some nice restaurant food. We found that some towns had really well priced meals at USD$6-9 like Granada and Isla Ometepe; but some places were closer to American pricing around USD$10-$18 such as San Juan del Sur, Leon and Little Corn Island.

There’s a great local restaurant, Comedor San Benito in Leon where you can get more food than fits in your belly for only $4. Another one is an amazing local shack called Rosa’s on Little Corn Island where you can enjoy a spectacular 3 course lobster meal for only $7.

By comparison you can eat a ridiculously amazing lobster and steak meal (surf’n’turf) for USD$18 at El Zaguan in Granada, or the most amazing breakfast burrito at Salud! in San Juan del Sur for around $8.

Tours were always the most expensive thing we did, but were a great way to experience numerous things you can’t do solo. Tours for things like volcano hikes and snorkelling trips will typically cost around US$20-25. The cheapest (paid) tour we did was a 3 hour tour through the islands of Granada for US$18, and the most expensive tour we did was a 6.5 hour tour and sunset hike up the active volcano Telica for US$45 including dinner, snacks and a free t-shirt. 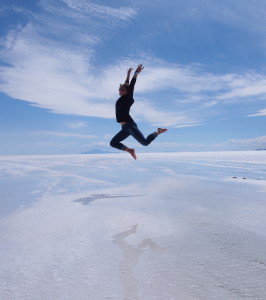 After eight months of continuous travel I have popped back home to Tasmania, Australia to spend the silly season with my family and friends (and of course soak up some of that hot Aussie sunshine).

In a moment of reflection I thought I would summarise some of the years adventures for you.

Random Foods I have Eaten 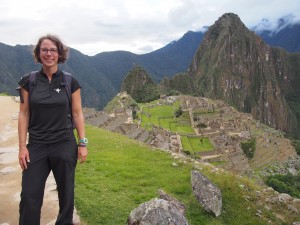 Hiking the Inca Trail and ending at Macchu Picchu, seeing the lost city of the Inca’s bathed in sunshine.

Seeing the great expanse of white of the Bolivian Salt Flats.

Riding a horse like a gaucho on a cattle ranch in Uruguay.

Jet boating under some of the smaller falls of the Iguassu Falls, hearing the thunderous water sounds and feeling the power behind it. 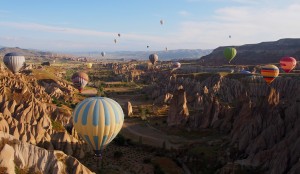 Hang gliding over the city of Rio De Janeiro.

Hot Air Ballooning over Cappadoccia with my mummy, seeing the most amazing landscapes. 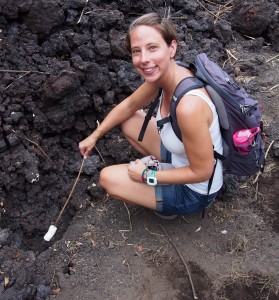 Diving into the crystal clear waters of cenotes in the Mexican jungle.

Hiking to the lava flow of an active volcano in Guatemala and toasting marshmallows.

Swimming with Sea Turtles and Sharks in Belize.

Visiting Quinta de Regaleira in Sintra to see the Initiation Well with my own eyes.

Riding a camel into the Sahara Desert at sunset.

Don’t forget you can check out all my photos on Flickr.