After Managua, Leon is the largest city in Nicaragua with a population of approximately 145,00 people. It didn’t feel like a busy city, though the city vibe was more buzzing than Granada.

We stayed in Leon for several days, left and then returned for another day or so. Leon is a good central point to use as a base for a short while. From Leon there are loads of cool activities to do, some of which we enjoyed and others we would have done if we had more time. 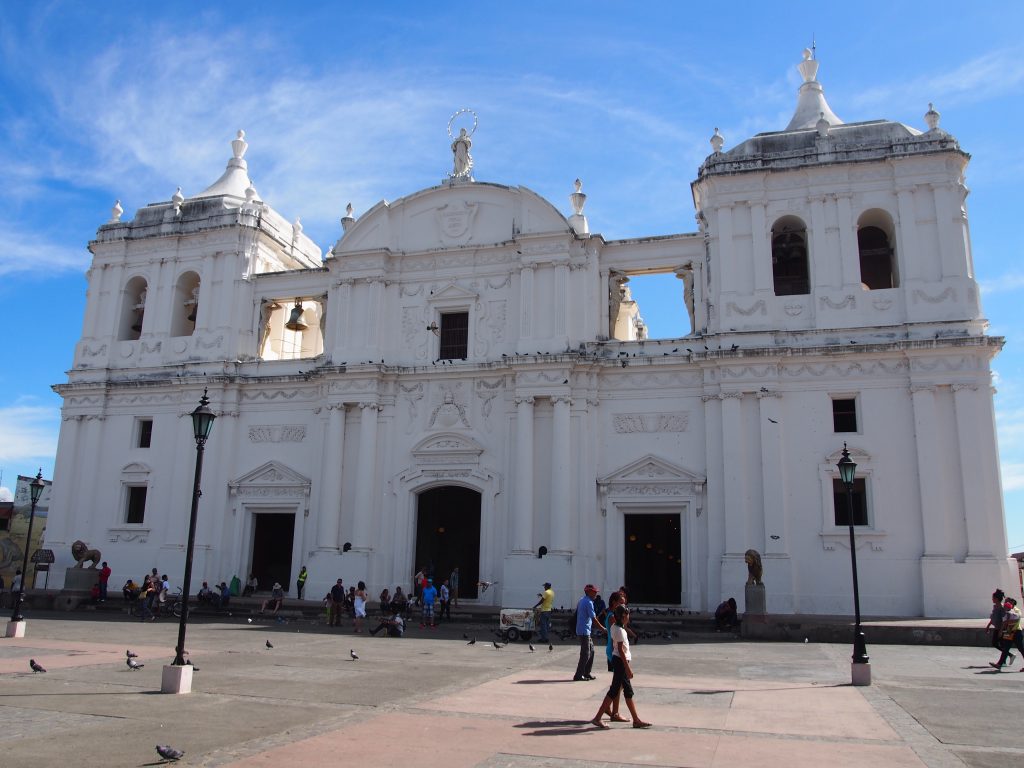 Our Stay in Leon

As with any city my ideal way to explore is on foot, take random streets, wander and get lost.  The city of Leon is wonderfully charming, it is full of  bright colours and colonial architecture, peppered with grand cathedrals and green parks, with volcanos and forests in the distance.

The revolution museum is a place I heard good things about and would like to visit if I were ever to go back.

Aside from some exploratory wanderings around the city,  most time spent in Leon was doing tours.

To get to know a bit about the city and the history we did a free walking tour. It was roughly 90 minutes exploring the inner city,  and learning the history through the political murals painted in various places. The guide Sebastian was from France but had been a Leon resident for quite some time, and while the accent was a little hard to understand, he had a true passion for sharing the history of culture of this beautiful colonial city with a rather turbulent past.

The tour starts in a small office near the NW corner of the cathedral, opposite the park with the huge mural. 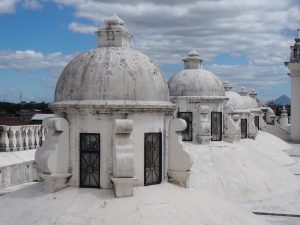 The main cathedral of the city is the size of a full city block and faces Parque Central. It was built to survive earthquakes and so far has held true to construction as it is the only church to have remained in tact during several earthquakes over time. It is perhaps the largest church in Central America and is a beautiful old building that is free to visit.

The most fascinating aspect of the cathedral are the five doors on the cathedral floor. These do not lead to a basement, crypt or cellar, rather they are escape tunnels leading to other churches. The were constructed during the time of pirate raids to help preserve life during pirate attack.

In addition to exploring the interior of the cathedral, I would recommend a visit to the rooftop. Tickets are USD$3 and purchased from a random door found outside at the back of the church. Entrance to the rooftop is from the NW corner. The cathedral rooftop has a beautiful display of domes to wander around and and offers spectacular views of the city and to volcanoes in the distance.

Quetzaltrekkers is the name of one of the many adventure tour operators in the city. We booked our adventures activities with this company as they have a safety first attitude and a community focus. All profits feed directly back into the community to fund education and rehabilitation programs for the children.
All guides are volunteers.
Note: Quetzaltrekkers discount if you do multiple tours. 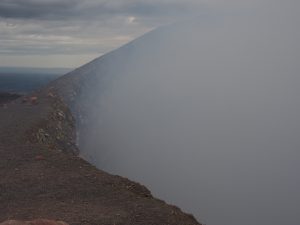 Telica Volcano is one of the tallest volcanoes in Nicaragua, and it is where you can hike directly to the rim at 900metres and peer into the belly of the volcano. We did the sunset hike up Telica to see it both during the day and at night, with a spectacular sunset in between. Unfortunately there were so many sulfur clouds we could not see the lava, but walking the rim of an active volcano was really quite the experience.

The hike up was relatively short, approximately 45 minutes. We spent some time at the crater edge before walking further away to have a better view of the full volcano. Before sitting on the side of the volcano enjoying a packed dinner, watching the sun set in the direction of the ocean. One of the most beautiful sunsets of my life! 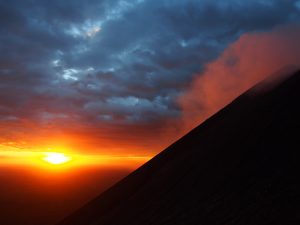 We ended our hike with an attempt to see the glowing lava in the volcano after the sun had set, but the billowing clouds of sulfur weren’t working with us. We hiked to the base of the volcano by torchlight and bumped our way back into town in the 4WD.

The Telica volcano is absolutely beautiful. Being so close to the rim, looking in to the belly of the beast so to speak, is pretty amazing!

Cerro Negro is a young and active volcano a short drive out of Leon. It’s quite a small volcano, only 500-600metres high, with a wide open top consisting of two craters and a very steep hike up. An eruption spewing fine ash enabled the creation of a new activity Volcano Boarding.

Cerro Negro in Nicaragua is, to my knowledge, the only place where volcano boarding exists as an adventure activity. As such, this activity has been on my bucket list for some time.

The hike up to the crater edge is reasonably challenging with a volcano board strapped to your back, hot weather, a steep climb and high winds. I actually found the last stretch along the rim of the crater quite scary. However the hike is worth the effort. At the top you can see into the crater, feel the heat in the ash and see spirals of sulfur escaping the hot ground. After taking in the wonderful view and active volcano experience it’s time to suit up and go over the safety talk.

With clear instructions the group split into two and lined up behind the ‘lanes’, one by one on the signal of our guide we took turns on our volcano board sledding down the side of the active volcano. The speed is dictated by you, using your body position and feet to control acceleration. As a bit of a chicken I went reasonably slow, I found the experience a little bit frightening but incredibly exhilarating and fun!! So much so, that I opted to risk the scary, windy, walk up for a second ride.

There’s nothing quite like sledding down the side of an active volcano, with wind and volcanic ash in your hair. WOW!

The tour costs  USD$30, and is approximately 6 hours. Quetzaltrekkers are the only company who allow the group to make two rides down the volcano. Included in the cost is transport, all protective clothing, equipment, water, snacks, lunch and a free t-shirt. 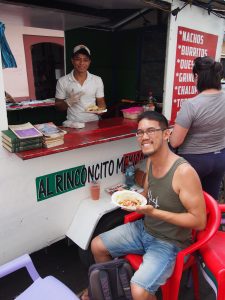 I didn’t really have any outstanding meals in Leon. Though I can still manage three recommendations.

The taco truck parked on the street 1ra Av. NO between Calle de Ruben Dario and 1ra Calle NO.

Comedor San Benito also on street 1ra Av. NO is brilliantly priced buffet style local food. We ate there numerous times, the food quality and quantity was great. We ate with the locals, and with such a busy location the food was always incredibly fresh.

Antonino’s had some great pizza at a reasonable price. It’s certainly not typical Nicaraguan, but nevertheless tasty, good food.

We had two stays in Leon, three nights and later one night.

We spent three nights at Hostal El Jardin. Location was good, prices were reasonable, some staff were great and others less so. We were very unimpressed with the cleaning. Our private room was not cleaned for our entire stay. I consider this unacceptable since all toilet paper is thrown in an open trash can in a room that is poorly ventilated and close to 30 degrees celsius. Also we used the laundry service for our clothes and we received them back just as dirty as we sent them in, though smelling mildly better.

Our single night stay was at Blue House Hostel when transiting through from northern Nicaragua to Managua. Blue House was also very well located, staff spoke fantastic english. Rooms were better ventilated than at El Jardin and were more spacious. The hostel had quite the party vibe, which didn’t bother us too much as it was only one night.

We travelled to Leon from San Juan del Sur, via Rivas and Managua; then we travelled north to Matagalpa before heading back south to Leon and then Managua.

Connecting between Managua and Leon the UCA buses depart from Mercado Israel Lewites Oeste and cost 61 Cordoba. The trip is around 2 hours.

Between Leon to Matagalpa, we travelled with an expreso bus, for 83 Cordoba. You need to buy a ticket and you are given an assigned seat. The ride takes approximately three hours.