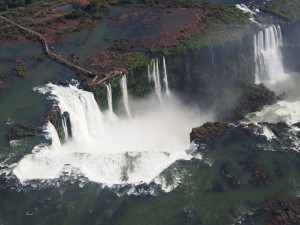 Foz Do Iguaçu is the town in Brazil that is closest to the Iguassu Falls. The name of the town means meeting of the rivers and has a population of approximately 30,000.

The falls, sometimes spelled Iguaçu, Iguazu or Iguassu are one of the new seven natural wonders of the world. Iguassu means great or big water and rightfully so! The average water flow of the falls is between 900-1500 m3 per second.

The Iguassu Falls are referred to as falls because there are multiple waterfalls along the river. The main fall is the Devil’s Throat.

The falls themselves border on Brazil and Argentina. 75% of the waterfalls are in Argentina and the remaining 25% in Brazil. The vast majority of the UNESCO protected national park is in Brazil and is 185,000 hectares in size.

The Brazilian side of the falls is generally where you go to get a great view of the falls. The Argentinian side is where you can really visit the falls; stand on platforms above them, hike the trails between them and even jet boat under them. The site gets an average of 1.5 million visitors per year; the record number of visitors in one day on the Brazilian side was 17,000.

If you are going to the falls then I would say you need at least two days, though I know I could happily spend even longer there. You don’t need a whole day for the Brazilian side, but you certainly need at least a full day on the Argentinian side.

Some tips for visiting the falls:

I’m once again at a bit of a loss for words to describe the falls; they are amazing; sublime; powerful; breathtaking and almost every other superlative I can think of. The roar of the Devil’s Throat is deafening and its spray has you soaked in minutes, but you can’t look away from something so majestic. The power of the water is such a challenge to comprehend. 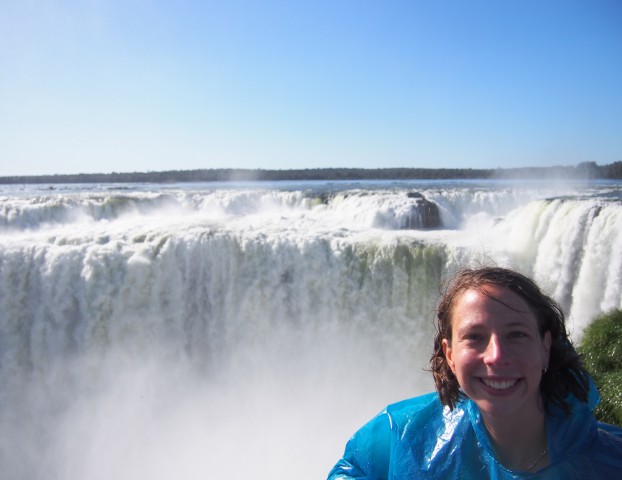 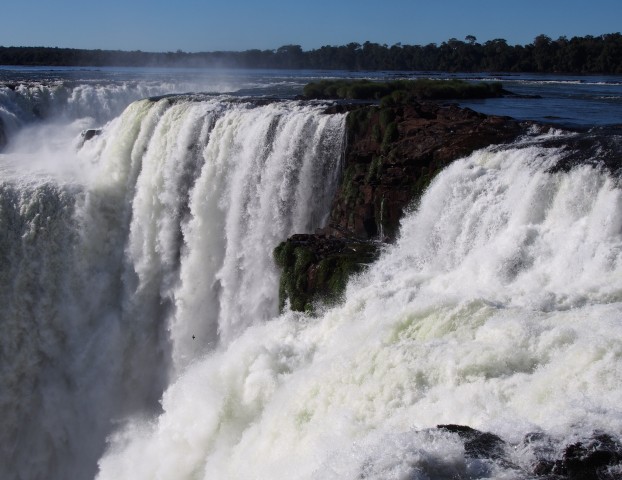 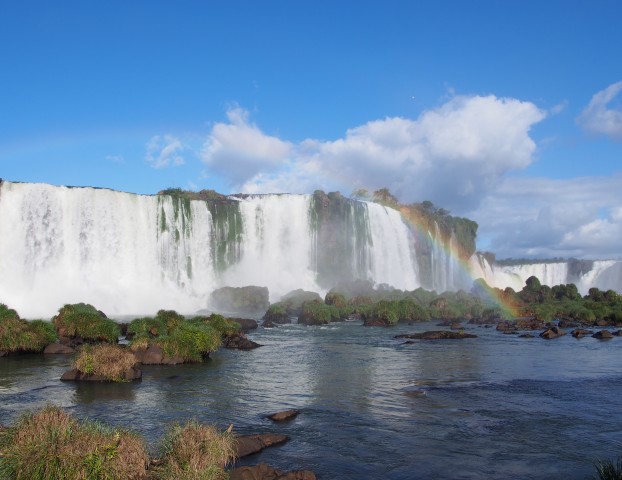 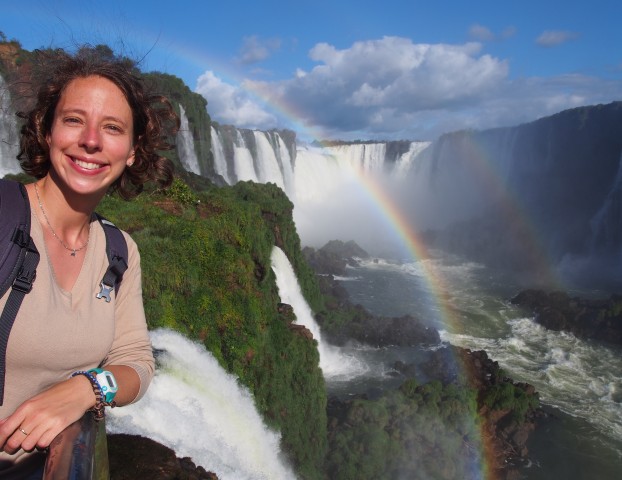 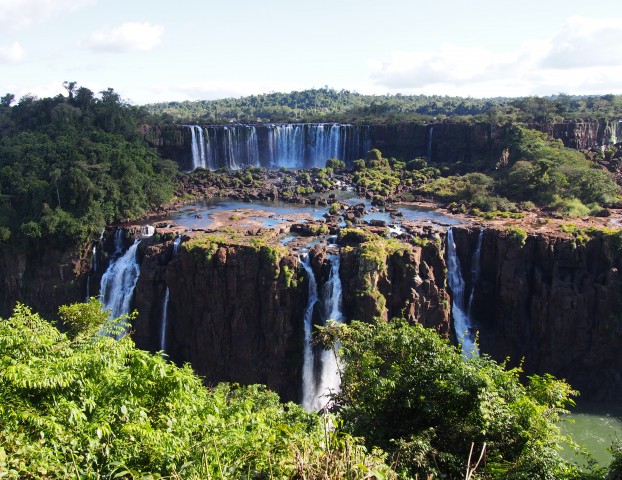 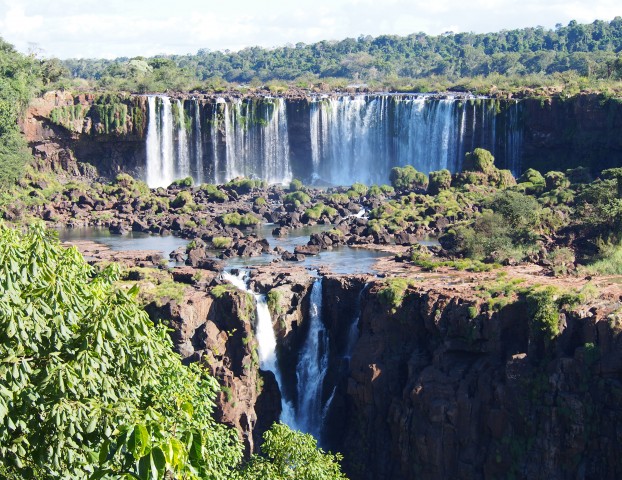 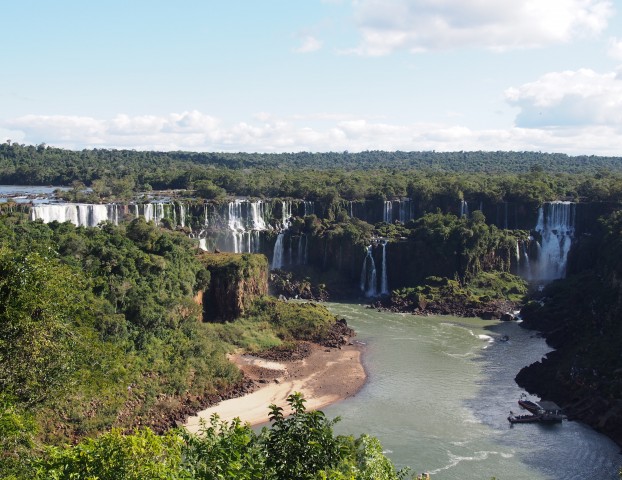 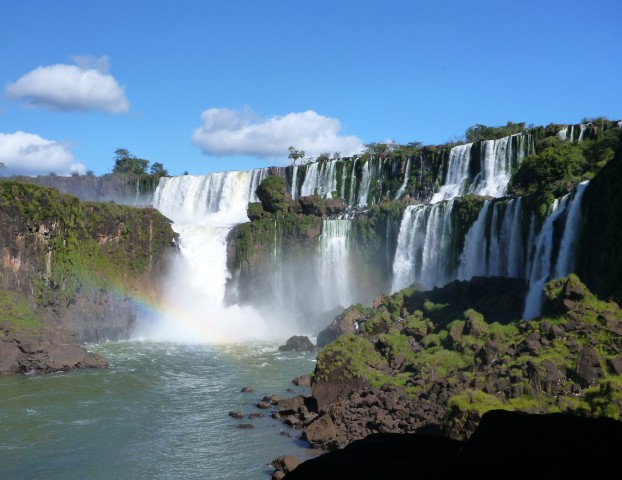 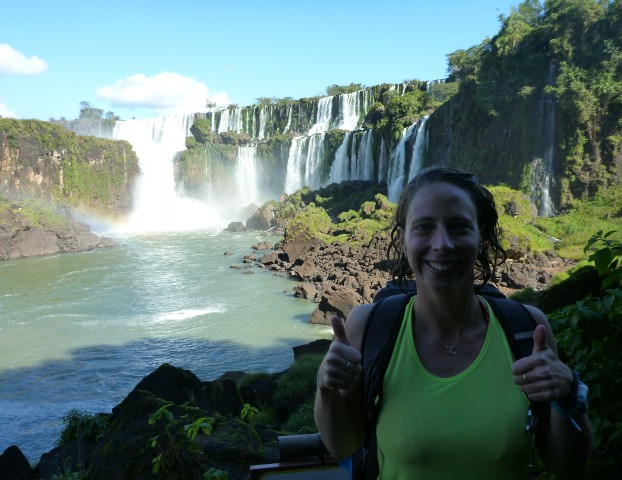 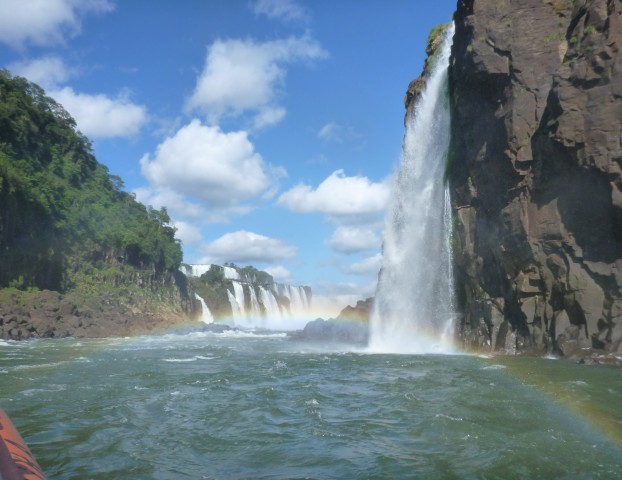 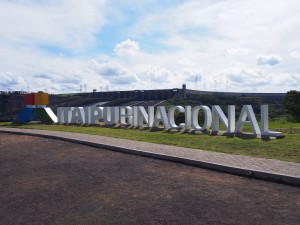 Half an hour out of Foz Do Iguaçu is the Itaipu Dam, which is the only binational place/company I have come across. The hydroelectric dam is one of the biggest in the world. It is 2.5kms wide and roughly 500metres high. It spans Brazil and Paraguay. While you can’t border cross through the dam, you can technically visit the other country without requiring a visa (this also means no passport stamp). The power produced belongs 50% to Brazil and 50% to Paraguay. Of it’s portion Paraguay uses 10% to power 95% of the country and sells the remaining power back to Brazil. The quick tour we did of the Dam was quite fascinating, but for us it was not the main attraction.

When anything is built, despite is being productive progress, there is always damage along the way. The creation of such a large dam, obviously had a big impact on the environment. To compensate a sanctuary was created nearby the dam with a focus on rehabilitating injured animals, regenerating forests, doing research into medical and scientific uses of plants, ecological sustainability; all the while running educational programs about all these issues as well. 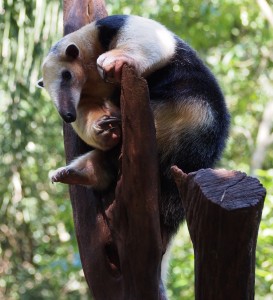 It was horrifying to hear the stories of some of the animals. There is particular breed of parrot, it is predominantly green with some other streaks of colour. Legally they cost $4000 reales to buy, but they can be bought on the black market for much less. People try to smuggle them into Brazil from Paraguay. One person who got caught had two plumbing pipes, he had filled them both up with tiny chicks of this type of parrot and poured in some alcohol (I can’t remember which type of spirit) to basically drug the birds to sleep, so they wouldn’t make noise as he tried to cross the border. Inside the pipes 70 chicks were discovered, only five of which survived. We were horrified to hear this, but thankful to hear that the Brazilian government has a very tough stance on the issue, the fines and jail terms are hefty.

Despite some horror stories, it was fantastic to hear just how much was being done to support the environment and the animals. There seem to be policies in place, that if you damage the environment in any way, you have to make up for it by affecting the environment positively. In our visit we were lucky enough to see happy and healthy animals, including an ocelot, ant-eaters, ferrets, capybara’s deer, monkeys, caymans, tapir, loads of different varieties of birds and snakes, and the highlight – a pair of jaguars. 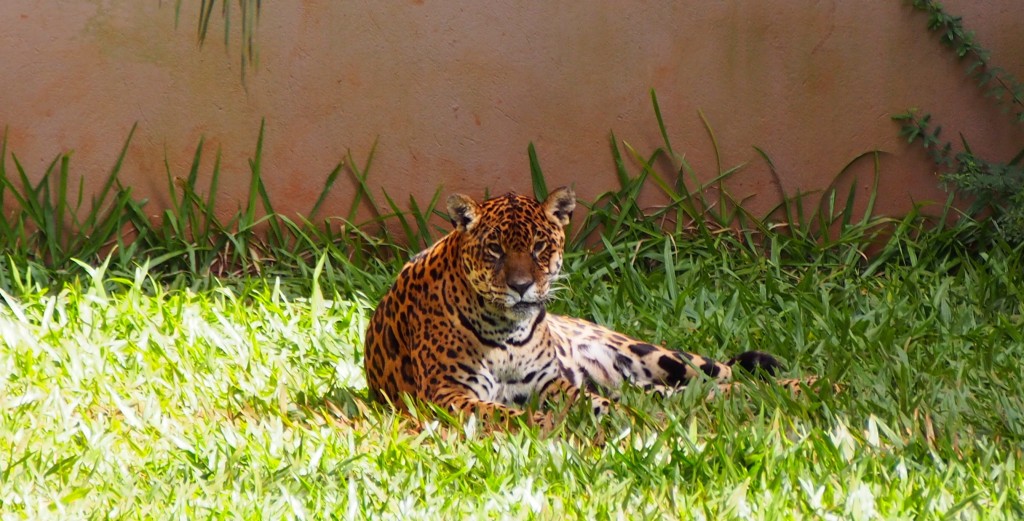 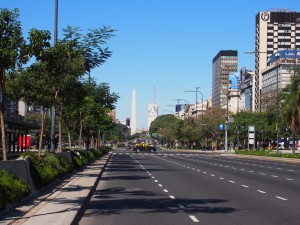 Buenos Aires is a sprawling city. Each suburb has something a little different to offer.

While I stayed in San Telmo I actually didn’t end up exploring the suburb as I had originally intended. I also heard good things about Palermo, but didn’t quite make it out there.
On the map, it looks quite easy to get around on foot, but once you start walking, you begin to realise just how great the distances between things are.
I didn’t see as much of Buenos Aires as I would have liked, but I did make it to all the places on my ‘must-see’ list. 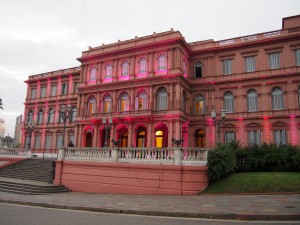 Around the city centre are so many gorgeous old buildings to look at and streets to explore – it’s worth wandering and just getting lost. 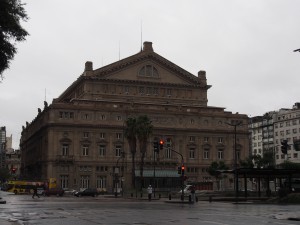 I did a free walking tour, the guide was a uni student called Loli. The tour  was about four hours of walking starting in downtown Buenos Aires near the famous opera house Teatro Colon (the day previously I did a tour of the theatre and it was just amazing!!!! A gorgeous theatre to see and a brilliant tour) and finishing at the Cemetary of Recoleta. The walking tour was amazing and we learned summary versions of the history and evolution of Buenos Aires. 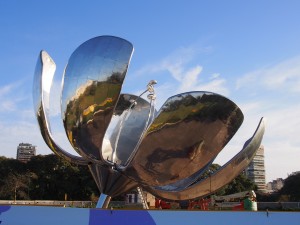 Recoleta is a suburb a few kilometres out of downtown Buenos Aires. It’s a super chilled area, with many cafes, markets and sculptures. 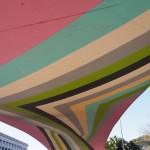 The highlight of Recoleta is actually the cemetery, the most expensive real estate in town!! The cemetery looks basically like a mini city, with many different ‘streets’ and the mausoleums each look like mini houses. It’s simply so fascinating to wander around and look at all the different styles of mausoleum. It’s also interesting to peer through the windows to see what ‘goodies’ were left to people in their afterlife – bridal flowers, books, photographs and more. Though I found it terribly sad each time I saw a child coffin. The mausoleums were predominantly for entire families, so many had multiple tiers of coffins shelved within them. Also they used to be used for storage as many people ran out of storage in their homes. 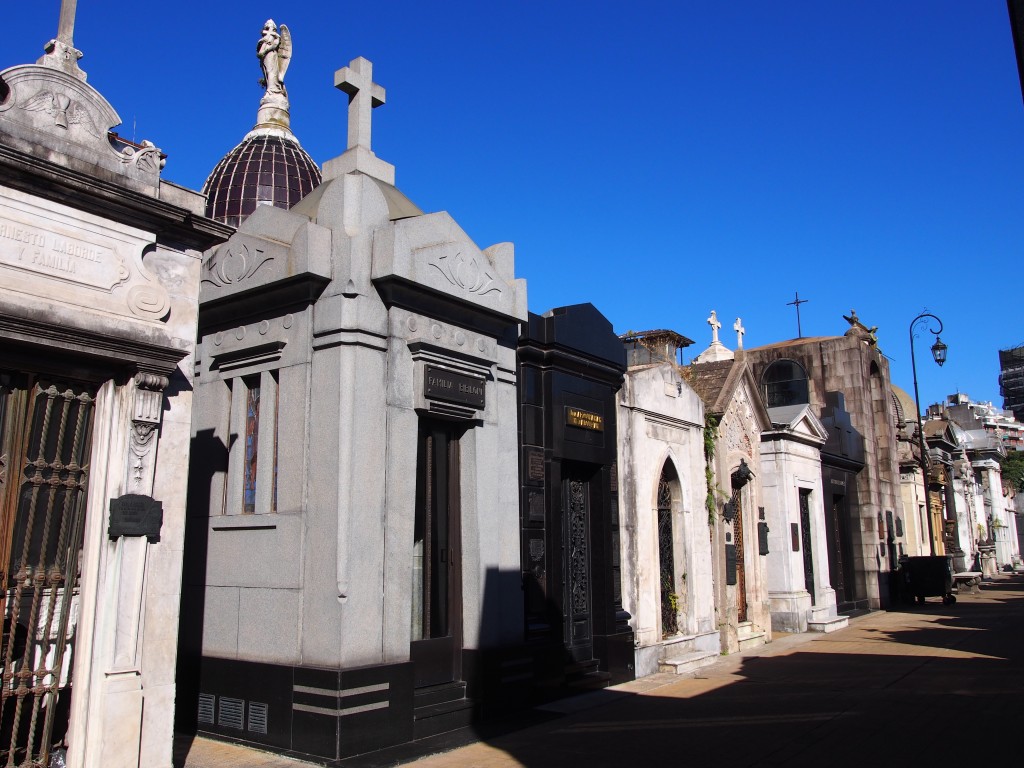 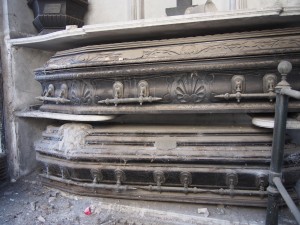 I’m not normally into cemeteries, but this place was throughly fascinating. It does also have the mausoleum of Eva Peron, the only one to be visited regularly and have fresh flowers. 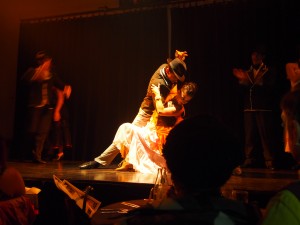 Argentina is known for the Tango. Apparently it originates through men fighting other men to vie for the attention of prostitutes. So the better fighter, or dancer was likely to win the attention of the prostitute. So the Argentines previously didn’t put a lot of importance on the Tango, until Europeans started to recognise it. At which time Argentina claimed it as its own and put more energy into perfecting the dance.
Together with the group I went to a tango show. We were wined and dined, did a tango lesson and then were treated to a show which showed how the tango has evolved over the years. It was just brilliant! 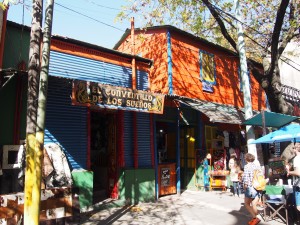 The Italian region of Buenos Aires is called La Boca. It has become famous for it’s Calle Caminito (Caminito Street) which is lined with brightly coloured buildings, most of which are multi-coloured. It’s an amazingly colourful area, very interesting to wander. 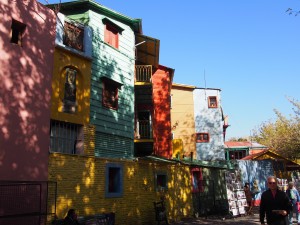 It is so clearly a tourist trap, all the souvenir stores and restaurants have hiked up prices. Tango dancers line the streets ready to pose for a photo with you just so they can charge you for the privilege.
It’s also a very unsafe area, so you need to get there by bus or taxi and leave via the same way. If possible, it is advisable to go in a group. Once there, there are only a few streets that you are allowed to wander. Police patrol the end of these streets to prevent you from accessing unsafe areas by mistake. 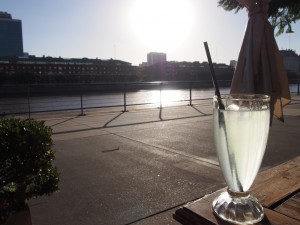 Buenos Aires is actually a fairly major port and the port area Puerto Madero was developed to support the shipping, however once it was finally built it was only used for 9 years before the cities shipping needs had outgrown the port. So the port was moved further away and made larger. 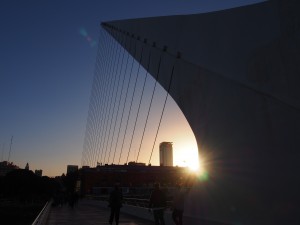 The Puerto Madero area is now super trendy and both sides of the port are lined with restaurants and cafes. Having grown up near the water, this was the area I felt most relaxed in Buenos Aires. It was a great spot to sit with a lemonade and people watch. 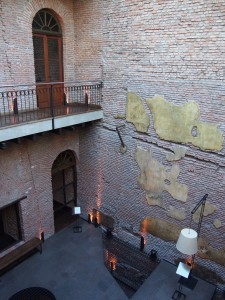 One archaeological site that I went to fairly last minute was just phenomenal; El Zanjon de Granados is a private museum in San Telmo. Many years ago it was the homestead of a well off family, tunnels were built over the creeks running underneath and houses were built above. As sickness spread in the areas, through the creeks and via the river, the wealthy families sold their houses and moved to a different area of town. The houses then became used a cheap tenement housing. Many years later a gentleman bought one of these houses to convert to a restaurant. As he started to renovate, he discovered the tunnels and the rich history of the property and went about restoring it. As restorations went on he discovered more tunnels under his neighbours properties and purchased the tunnels (but not the houses) off them.
More tunnels are being found and restored even today. The site is absolutely fascinating to visit and has been beautifully restored.
Buenos Aires is such a big city and has so much to offer, my three days really was the minimum amount of time you would want here; four or five would be better.
To see all my Buenos Aires photos, check out my album on Flickr.