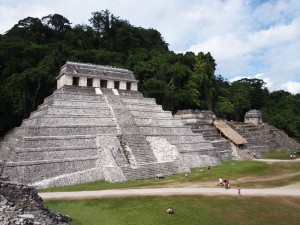 Palenque is perhaps a slightly lesser known Mayan site than Chichen Itza, but it is still famous and rightly so. It is a much larger temple complex than Chichen Itza and in my opinion much grander. There are more buildings, the buildings are larger and more elaborate. It is also much more obvious that this was a city where people lived as you can see the areas where people lived, the temples, the common areas, the aqueduct and so on.

The biggest and perhaps most important temple in the area is the Temple of the Inscriptions. This is a very grand temple, inside which the remains of King Pakal were found. His body was adorned with a jade mask and jade jewellery. 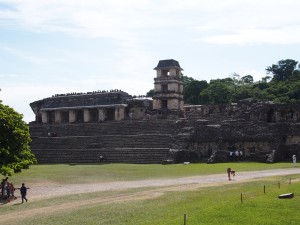 Next to the Temple of the Inscriptions is the Temple of The Red Queen, whose remains were found painted completely in red. Unfortunately this affected the ability to complete DNA analysis on the remains, so it is uncertain who the red queen was, though some people are guessing it may have been Pakal’s wife.

Adjacent to these temples is the palace. This was a large building with many levels and many rooms. Though worn away over time the walls were once heavily decorated with stone reliefs and elaborate and brightly coloured paintings. 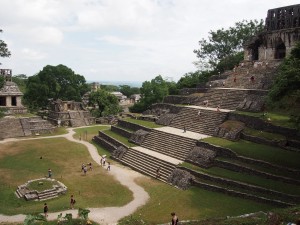 All of the temples have nine terraces, except the Temple of the Cross which has 13. This was the wish of Can Balam.

The numbers 9, 13, 20 and 52 are significant to the Mayans. The number nine represent the underworld, partly because it would take nine days for a corn to seed after having been planted, and the Mayans believed they were descended from corn. The corn seed would have to defeat nine levels of the underworld in order to survive, live and grow. 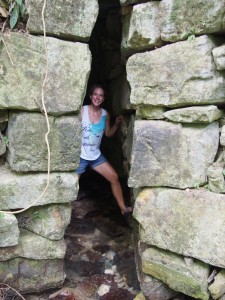 The number 13 relates to pregnancy, as the term of a pregnancy is 13 Mayan months. There are also 13 months in the religious calendar, and thirteen squares of the shell of a turtle.

A Mayan month is 20 days, the year is made up of 18 months of 20 days plus one unlucky month of 5 days. This is the sun calendar of the Mayans.

After exploring the main, excavated temples we went on a jungle walk which is predominately pre-pakal buildings, bt they are still buried beneath the jungle growth. It was pretty fascinating to see how these temples would have appeared (and still do appear) pre-restoration. Essentially any hill you see is actually hiding a temple. Quite a bizarre and awesome concept! 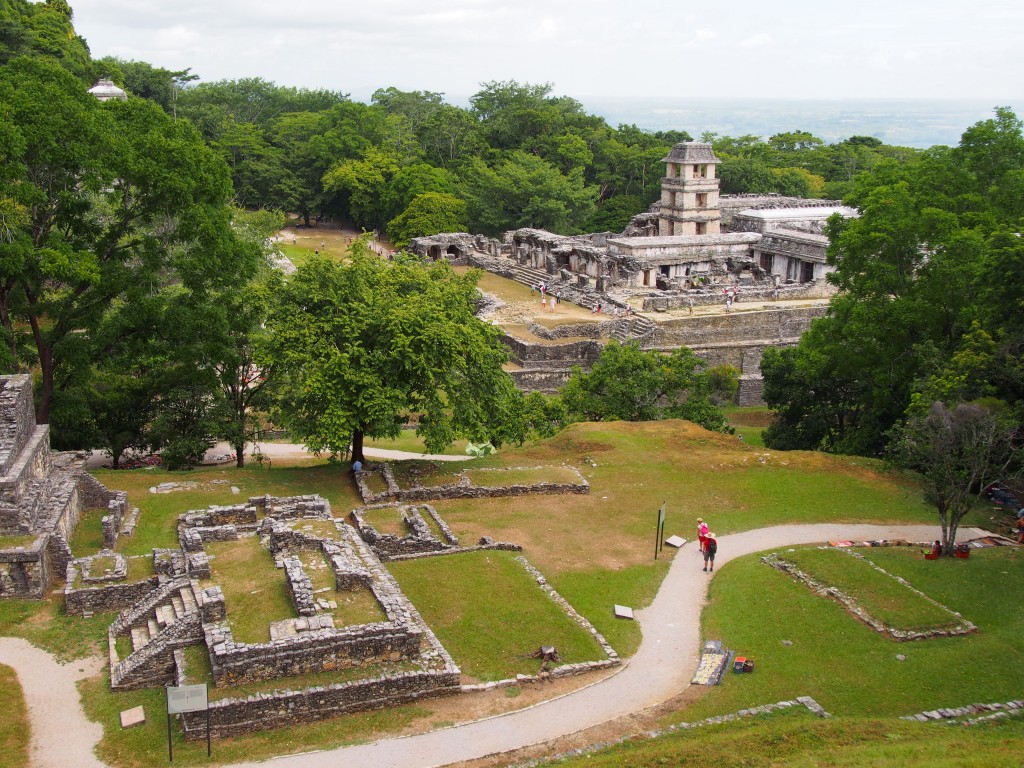 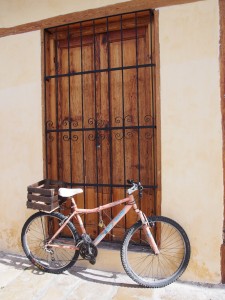 The next stop after Palenque was San Cristobal de Las Casas, in the highlands. There was a noticeable drop in temperature on arrival!!

The town is absolutely gorgeous, there are cobbled streets and loads of churches, it was just fantastic to explore. The buildings are all brightly coloured and super quirky. I spotted many interesting door and window frames, as you will notice by the photos. 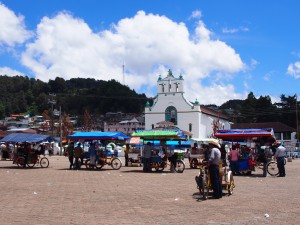 On the first full day in San Cristobal de Las Casas we did a tour of two Mayan Villages, San Juan Chamula and Zinacantan.

Interestingly these villages aren’t far from the centre of San Cristobal de Las Casas, and their architecture and level of development is the same. The villages however are completely independent, they operate on their own time zone (an hour earlier), they have their own police, their own laws and regulations and the Mexican government does not intervene. 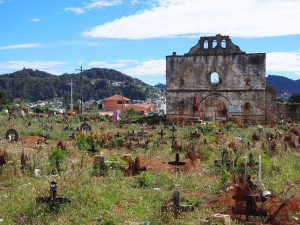 The crime rate in these towns is very low and prison sentences are very short, with a maximum stay of three days. If one cannot afford the fine, they may also be required to do community service. If the crime is severe, such as rape or murder, the punishment is equally sever – death. It may be death by beating and being burned alive or by being lynched. So this is a good explanation for why the crime rate is so low, in my opinion.

The people in San Juan Chamula consider themselves to be predominantly Catholic, though aside from baptisms there is no clear link to Catholicism as we know it. The Catholic church has Shamans who perform rituals and sometimes sacrifice chickens. The men are allowed to take multiple wives and wedding ceremonies are never performed in a church. 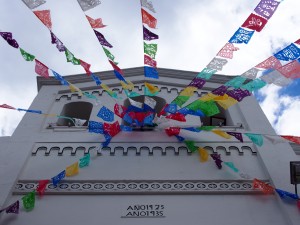 The people in Zinacantan view themselves are Christians and there is much more visible link to Christianity as we know it, including church weddings and only allowing one wife.

The primary industry in San Juan Chamula is growing vegetables, while in Zinacantan they grow flowers. 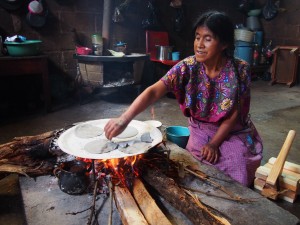 In Zinacantan we were invited into the home of a family to see a demonstration of back strap weaving, which is how they weave their elaborate tapestries and other woven goods. A lovely lady also demonstrated how they make traditional tacos. She made us some delicious purple corn tacos. The hospitality of these people was lovely. 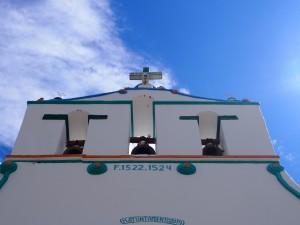 In the Catholic church of San Juan Chamula we witnessed a ceremony performed by a Shaman on a girl who had lost her spirit. As part of the ceremony, the Shaman took a chicken, held it upside-down by its feet and waved it over some candles or incense, then waved it around the body of the girl, before wringing its neck (it didn’t make a noise at all). If I remember correctly, the process would then be for the girl to go home and eat the chicken (perhaps just the head) and stay in her room for five days. After that time she would go with the Shaman to the place where she had lost her spirit and call it back using some kind of egg shaped whistle.
There may be more to the process, but those were the bits I heard. Such a strange concepts, but thoroughly fascinating!
The tour cost 200 pesos. 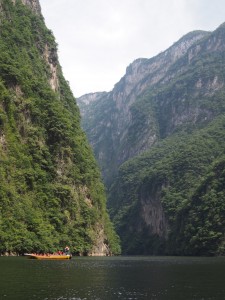 On the last full day in San Cristobal de Las Casas, a group of us went on a boat tour of a Canyon just outside of the town Chiapa de Corzo. The canyon was gorgeous and it was so relaxing to be on the river. We cruised up and then down the river for approximately two hours.

Along the way we did see some wildlife, some Caymans, Pelicans and a variety of other types of birds. Anyone who knows me, knows that I am a) terrrified of birds and b) useless at identifying them.

We finished the tour with a short hour stop in the central plaza of Chiapa de Corzo – another cute Mexican town.
The tour cost 200 pesos. 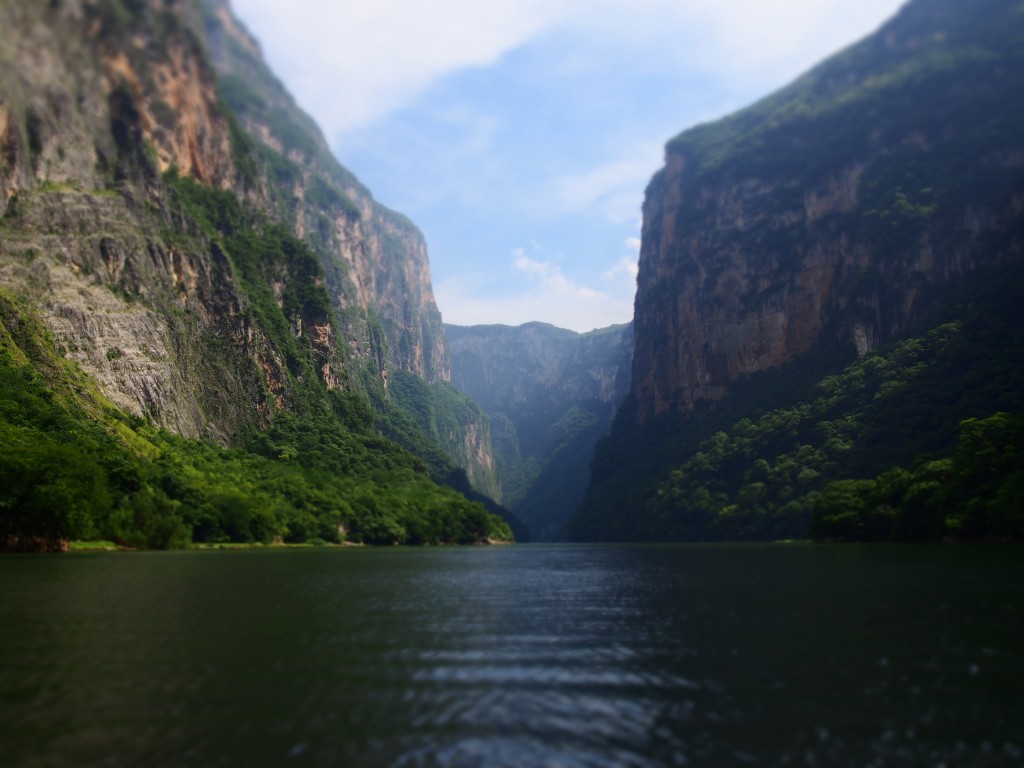