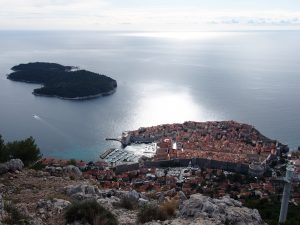 The Balkans, or Balkan Peninsula is a region named after the Balkan Mountains, and that borders on the Adriatic, Ionian, Aegean and Black Seas. It is a large geographical region encompassing several countries. I spent a week in the region visiting four cities within these three countries: Dubrovnik, Croatia; Kotor and Budva, Montenegro; and Mostar, Bosnia-Herzegovina.

It wasn’t the most active sightseeing week, as we were plagued with constant rain. Regardless of the weather, everything we saw was fantastic, beautiful and my mother and I had an amazing time.

Dubrovnik is a city I have long wanted to visit. The old walled city was rumoured to be beautiful, and it most certainly lived up to expectations. Also for those Game of Thrones fans out there, various sites in an around the old city of Dubrovnik were used in the filming of the series.

I loved the city walls, surrounding a sea of orange tiled roofs; the old architecture and wonderful charm of this old town.

Croatia is a small EU country on the Adriatic coast, with a recent turbulent history. Croatia was part of Yugoslavia from 1918 through to the 1990’s. Yugoslavia was made up of what is now known as Serbia, Croatia, Bosnia-Herzegovina, Montenegro, Slovenia, Macedonia and Kosovo. Croatia is a long country with a huge amount of coastline very popular for tourism, as a result it was of great economic importance to the ruling region of Serbia.

In 1991 Croatia made the decision to become independent and this didn’t go down well with the Serbs; who followed the announcement with a war that continued until 1995. Croatia sustained heavy bombing and vast amounts of damage. With the tourist economy a sore point for the Serbs, they set their sights on destroying the Old City of Dubrovnik. As a UNESCO World Heritage listed site, this was considered an international war crime.

The heritage city of Dubrovnik was more than 50% destroyed in the war, though you wouldn’t know it today. Dubrovnik received money for rebuilding from UNESCO, though it only covered 20% of what was needed. The resourceful Croatians managed to raise the remaining 80% themselves.

To maintain the original look and feel of the city many craftsman had to relearn the traditional trades in order to rebuild using the same materials and same method as original construction. While many things could be remade using new materials and old methods the roof tiles proved a problem. As they could not remake the roof tiles, they bought up original tiles from owners of private houses in the region who had undamaged roof tiles and paid for them to have new roofs.

The city of Dubrovnik has a population of approximately 42,000 people, roughly 800 of whom live in the old walled city. Tourism to the city is absolutely crazy and they are now looking into the introduction of a cap on the number of daily visitors. In 2017 this tiny city had 1.18million visitors, not including the tourists coming in from cruise ship visits; on a summer day there may be 7000+ tourists trying to explore the town. For this reason I was rather grateful to visit during cold wet November, as the season was shutting down and stores were closing for the winter; there was not a single tourist queue to be found.

The Old Town was built during the 13th to 17th century on a small valley by the sea. the Northern and Eastern sides of the city are each on a hill, while the main street of town, Stradun is near sea level. As a result the old city has many steps, 5,435 in fact (the most direct route from the centre to our apartment involved 144 steps). The city is surrounded by a city wall 2 kilometres long, protected by five fortresses. The greatest enemy to Dubrovnik were the Venetians.

Dubrovnik was a small republic during the 14th to 19th century; and at that time 14,000 people lived within the city, with the gates always closed. 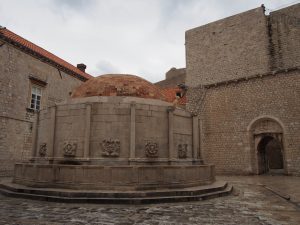 There are a few notable constructions within the old city, amongst which is the Onofrio fountain. The Onofrio fountain is fed by a well some 12 kilometres away.  It is found just inside Pile Gate, the Western entrance to the city. It was designed by an Italian architect, and facilitated the peoples’ ability to live within the city walls without the need to leave in search of water. It’s a beautiful fountain with many taps, and intricate carvings. It also has a dog sculpture, ‘Kučak’’ guardian and protector of the values of the Republica, on top of it.

On April 6th, 1667 Dubrovnik experienced a terrible earthquake but surprisingly the San Xavier Church and anything built near the city walls survived. The earthquake affected architectural design in the city; with the construction of balconies being forbidden. The Earthquake marked the beginning of the end for this small republic.

Dubrovnik is 95% Roman Catholic, but the people are very accepting and respectful of other religions. Their city is has allowed the building of several religious buildings within the walls. There are Catholic churches, a Jesuit Church and a Franciscan Monastery. There is also an Orthodox Church, though it was built to face away from the main street, because if the pope were to visit they did not want him to be confronted by other religions.

Wandering the tiny alleys of this old walled city is a spectacular way to spend the time, as every corner oozes charm. I really loved Dubrovnik old town.

To learn some history of the city and get a local’s perspective on life in Dubrovnik, take an Old Town Walking Tour. The cost is 90 Kuna for 1 hour.

For the Game of Thrones fans, there are several GoT walking tours available.

Take a self-guided walk around the city walls and around St Lawrences’ Fortress. You do not have to complete both activities in one day; but the combination ticket is single use per activity. The ticket costs 150 Kuna. 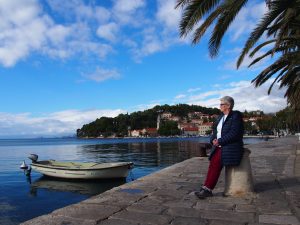 Take a cable car trip up the mountain for some spectacular view of the old city and coastline. The Cable Car cost is 140 Kuna for a round trip; though active people may like to walk up and/or down using the marked trail. Note, if it is windy, the cable car will not operate for safety reasons.

Take a trip out to Lokrum Island; the  ferry costs 40 Kuna. On arrival you need to pay a parks entrance fee. Some ferries are more expensive, but already include this fee. Note: in low season, nothing is open on Lokrum – so be sure to bring food and water.

If you have extra time in the area, it’s worth taking a local bus to the neighbouring town of Cavtat. It’s a beautiful spot to enjoy a stroll and a lazy lunch. 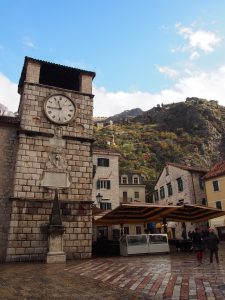 From Dubrovnik we booked a day tour to Kotor and Budva, Montenegro with one of the many tour operators in and around the city of Dubrovnik. We paid 315 Kuna per person for a full day tour with Amico Tours.

Montenegro is a small country, just under 19,000 square kilometres, with a population of 660,000 people. Like Croatia, it has a coastline on the Adriatic Sea.

Montenegro got it’s name from the Spaniards entering by ship, from the black (Negro) mountains (Monte) they could see from the sea.

Like Croatia, Montenegro was a part of Yugoslavia, who managed to gain independence in 2006. At the time they took on the Deutsch Mark as their currency, so when Germany changed to the Euro, so did Montenegro despite not being a member of the EU.

The small town of Kotor, predominantly of Venetian Architecture is a walled city built around the 14th century. This small city is the 2nd largest walled city, 4.5 kilometres long, in Europe, according to my tour guide. The city of Kotor has a population around 13,000; approximately 1,000 of whom live within the city walls.

While we could clearly see that it was a beautiful city with stunning old buildings, and an impressive city wall which we would have liked to climb, the torrential downpour with only brief bursts of sunshine limited our options. 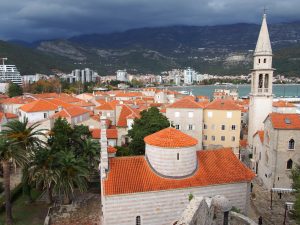 Budva is one of the oldest settlements in Montenegro, at around 2,500 years old. Similar to Kotor, it is an old town built in Venetian times, though less money was spent on it in comparison to Kotor. It’s walled city is tiny in comparison to that of Kotor.

Budva is much more popular for tourists, with it’s 34 beaches and many nightclubs.  The party-tourism focus falls less within my interests than the smaller town of Kotor.

Bosnia-Herzegovina is inland from the coast of Croatia and has very little coastline itself. Bosnia is the northern region of the country and Herzegovina the southern region. In this view I visited Herzegovina only. The day tour to Mostar and Kravice Waterfall from Dubrovnik cost around 350 Kuna per person, and I cannot recall the tour company I went with. 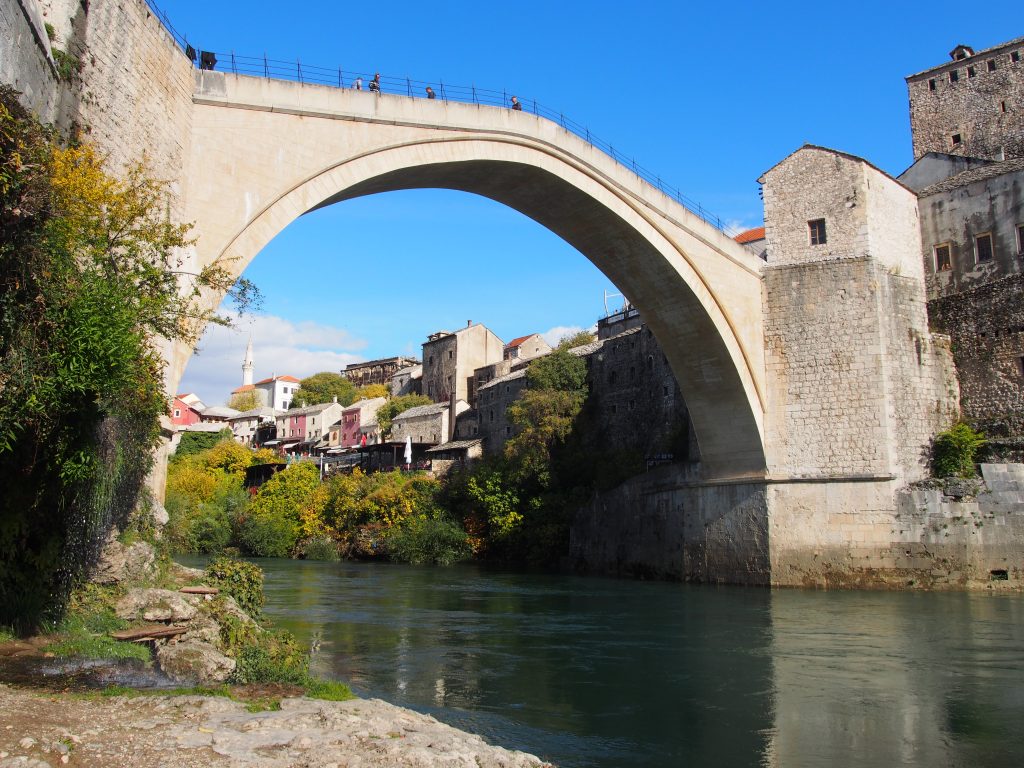 The city of Mostar is considered the most important city in Herzegovina, is the cultural capital and is the fifth largest city in the country. The city is split by the Neretva River, and the two sides of the river provided quite some segregation in community. One side was muslims and the other Christians/Catholics. This meant the city had two of everything, two schools, two universities etc.

The highlight of Mostar is the bridge connecting the two sides of the city. The term Most means bridge and the Mostari with the bridge keepers. The bridge was designed an built during ottoman reign though it was bombed in 1993 during the Bosnian war time and rebuilt soon after.

The bridge was listed by Lonely Planet as one of the worlds most beautiful bridges, and I don’t disagree. It is absolutely spectacular, a perfect deep curve over clear blue waters. It is simply stunning.

The old town of Mostar is worth visiting for it’s charm as well as its bridge. Beautiful cobble stone streets and old ottoman architecture.

Something that I consider worth mentioning about Bosnians, they cook fantastic meat. I had a Bosnian housemate for some time and she made the most amazing meat dishes. While in Mostar, I’d recommend eating at Šadrvan to enjoy some of the national meat specialities. 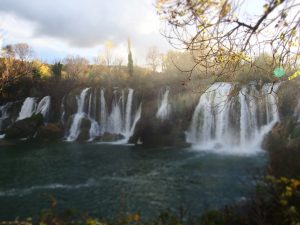 Our day trip to Bosnia-Herzegovina included a stop at the Kravice Waterfalls. The waterfalls are approximately 25 metres high split across approximately 20 waterfalls, falling into a beautiful lake below.

If you had enough time, this would be a fantastic place to spend a day to sit, picnic, swim and enjoy the beauty of nature.

We stayed in a private Airbnb apartment just inside the city walls on the sea side. It was a fantastic location, the apartment was neat and tidy, and the host very helpful.

At €36 per night for two people, it was reasonably priced.

If you aren’t already an Airbnb member; please sign up using my link.

The shuttle bus to and from the airport is only 40 Kuna per person one way and is a 30-45 minute ride. It travels quite frequently and takes you directly to the entrance of the old walled city of Dubrovnik; Pile Gate.

Taking a taxi if the bus schedule doesn’t work for you is around €30 one way. They accept both Euros and Kuna.

We flew Amsterdam – Dubrovnik return with Croatian Airlines for €402 for two people. Note we travelled in low season and booked the flights some months ahead.