Slovenia is one of the smallest countries in Europe with a land size of just over 20,000 square kilometres with a population of 2 million; 280,000 of whom are based in the country’s capital of Ljubljana.

Slovenia has a small section of coastline on the Gulf of Triest in the Adriatic Sea. The remainder of the country is inland with beautiful green rolling hills, high peaks in the alps, crisp blue rivers, canyons and lakes. 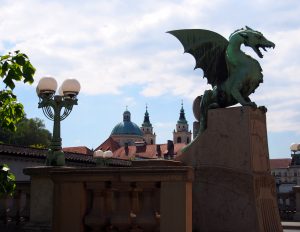 Ljubljana is a magical city that is more than 5000 years old. The city’s history goes back to Greek mythology and the story of Jason and the Argonauts. Jason was said to have followed a river on his return home from having stolen the Golden Fleece. Where the river dried up he and his team continued on foot until they found a lake guarded by a dragon. A fight ensued, Jason slay the dragon, but the legend of the dragon protector of Ljubljana was then born. The dragon remains the symbol of the city, and a bridge guarded by four dragons now pays homage to the dragon.

In Jason’s day Ljubljana was a lake amongst fields of green. The lake has since been dried up  during the Roman period and a city has been built up. Many of the older buildings in the old centre were built in the middle ages, there are also many 17th century architectural designs to be found in baroque and art nouveau style. After an earthquake destroyed roughly one third of the buildings,  the newer constructions were typically 19th century Art Nouveau. Many of the buildings, sculptures and general design were created by architect Jože Plečnik.

Despite the beautiful array of architecture, the city maintains a balance of nature and culture, with many parks and tree lined streets. The city is also flanked on two sides by forests with unrestricted access to the wildlife; as recently as six years ago a bear strolled into town! 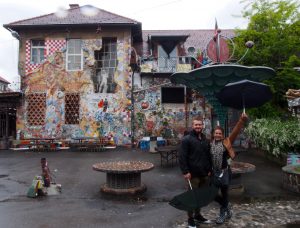 The focal point of the city is the castle on the hill; the old city and the river sweep in an arc around this castle hill. The river is the cultural hub of town and all the main historical sights are along the river. Numerous bridges of different designs allow one to cross back and forth from one side to the other.

The old city has a wonderfully alluring charm, and I absolutely adored strolling around. While it is very easy to get around and find things, for orientation as well as city history and legends I would highly recommend the free walking tour; some highlights include: the Pink Church, Cathedral, Triple Bridge and Dragon Bridge.

Not included in the walking tour is a visit to the castle on the hill. You can walk up there in around 15 minutes or can pay to ride a funicular up the hill. The funicular costs €4 return or €10 including a castle visit. A castle visit by itself is €8. The courtyard, cafe, a few hallways and towers of the castle are free to enter. I did not pay for a ticket and I do not feel I missed anything.

In addition to appreciating the old architecture the city does have some more modern work, street art. Unfortunately timing didn’t work out for me but I really would have liked to do the graffiti walking tour. However I did make it to the popular street art site, Metelkova Mesto. Previously army barracks turned into squats, it has become a bit of a street art and cultural hub. It’s well worth a look around. 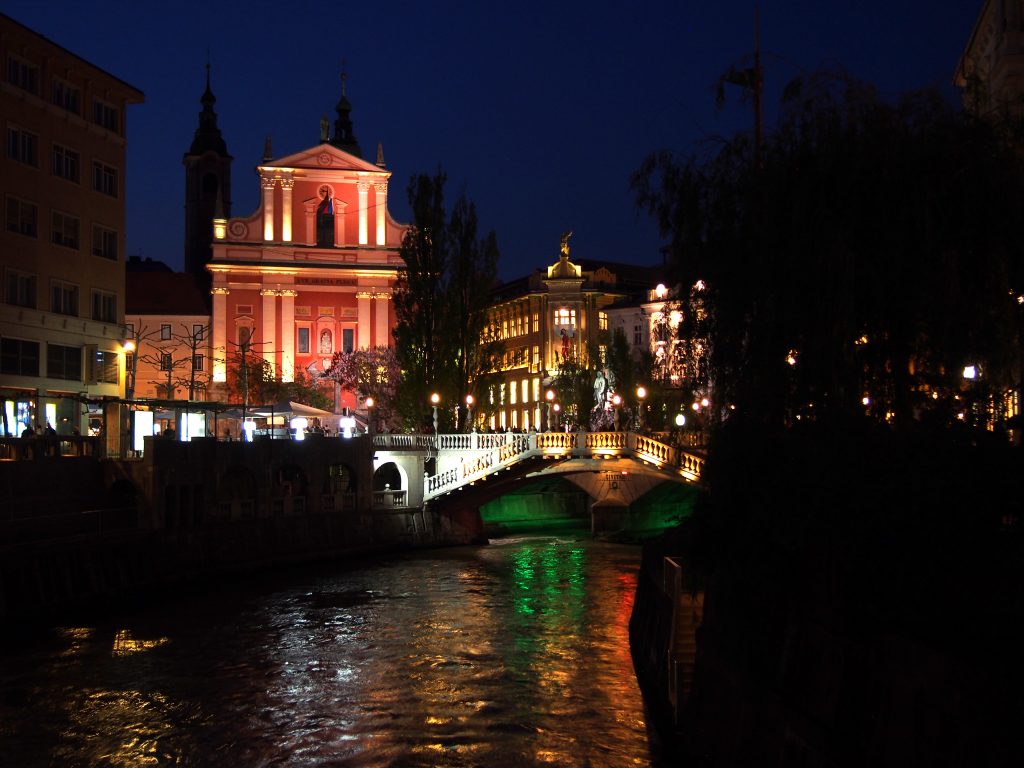 I throughly enjoyed exploring Ljubljana by foot, certainly within the old town there is no need for transport.

For traditional food I have two restaurant recommendations:

Violin offer a good range of Slovenian foods, a great ‘menu of the day’ option and a really good price point. Service is a bit slow and not the most friendly I have ever experienced.

Julija had spectacular food at a higher price point, and brilliant service. You have to be lucky to get a table. I was lucky by going in for an early lunch. Simply divine flavours! 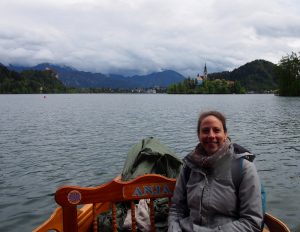 The town of Bled is best known for it’s lake, Lake Bled. Settled between the rolling green hills is a beautiful green water lake, 31 metres deep and home to 19 types of fish. Some of which are insanely huge!

Within the lake is a small island of triassic limestone and dolomite, rising from the floor of the former Bohinj glacier. You can rent a boat to row out to the island, or you can pay for a seat in a boat for €14.

On the island is the Church of the mother of God on the lake, which you may visit for €6. In the church is a wishing bell which visitors may ring, and as a result the bell ringing can be heard echoing across the lake throughout the day. A truly beautiful and calming sound.

On the lake overlooking the lake is Bled Castle, it affords beautiful views over the lake and surrounds. The entry fee for the castle was €10, and while the castle is steeped in history I was a little disappointed that the majority of spaces had been converted into shops.

Walking or cycling around the lake is a brilliant way to spend the time and enjoy the area. My estimation is that the distance around the lake is approximately 6 kilometres. The highlight for me was an additional short hiking loop at the far end of the lake to the two viewpoints: Mala Ojstrica (611m) and Mala Osojnica (685m). The views were absolutely spectacular and the first time I had seen the sun in Slovenia (I was simply unlucky with the weather for most of my trip).

Vintgar Gorge is a site worth visiting in the area. Along the river is a walkway which you can stroll along into the gorge – unfortunately due to heavy rains the gorge trails were closed when I visited. I was told that there is also a 2.5 hour walking loop along the mountains overlooking the gorge, but with time constraints I chose not to walk it. Vintgar is approximately a 7 kilometre round trip from Bled. You can get there by walking, by bicycle or pay €5 each way for a transfer (if you are solo then it is €10 each way); in high season there is also a tourist bus available. 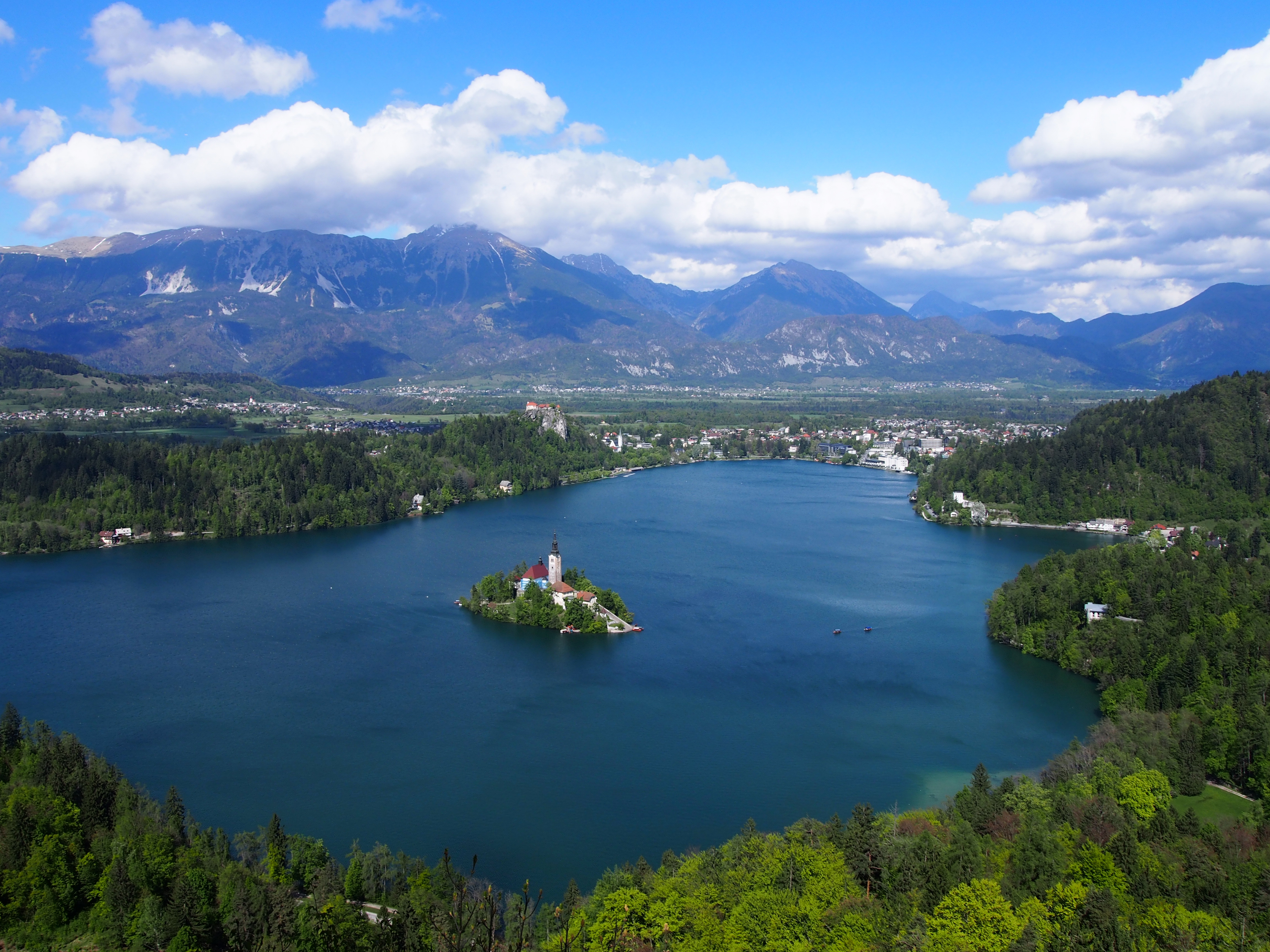 I have only one restaurant recommendation from myself, and one on the word of a friend.

Okarina was the restaurant I went to twice. The price point was quite high in my opinion, but the food and service was amazing! I had the balkan meat skewer on one occasion and the flavours and tenderness of the meat were simply mouthwatering! The wild boar cutlets I had the following the night were equally amazing.

Friends had dinner in the restaurant in the castle on the hill overlooking the lake, they claimed that the food was simply divine!! An added bonus with dinner at the restaurant is that if you have a restaurant booking you do not need to pay the castle entry fee.

I found and booked my flights through Momondo.
The best deal I could find was a return trip Amsterdam – Ljubljana for €265.

Airport transfers can be arranged online with one of the shuttle bus companies such as Markun or GoOpti. They both advertise transfers for €9, however when I tried to book a Sunday transfer with GoOpti they wanted to charge €13 so I stuck with Markun. I found them reliable and efficient.