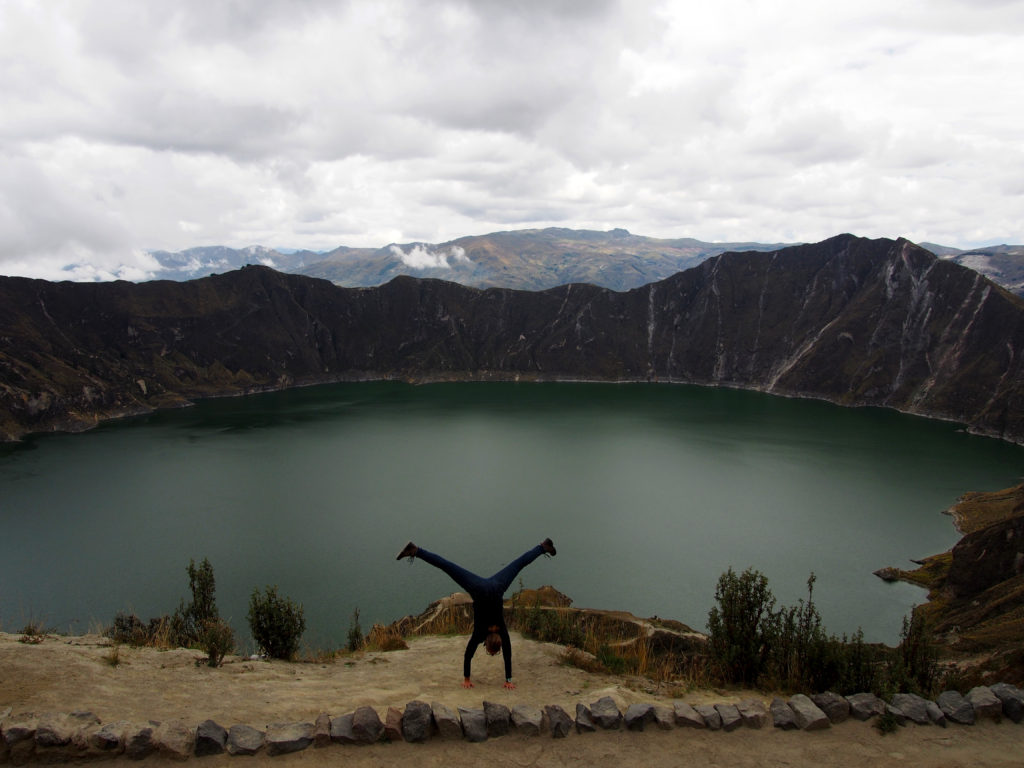 After 19 months of continuous travel, I finally ran out of money. My last hurrah before moving to The Netherlands to get a ‘real’ job, was a four day flying visit to Quito.

Despite having spent quite some time in Ecuador, I have still seen so little of a country I truly love. My biggest regrets from my previous visit were not having been to Quilotoa Volcano Crater Lake or Cotopaxi Volcano, so these were my Must Do activities for this fleeting visit.

Due to time restraints I chose to visit them both on day tours from Quito. I booked both tours through Community Hostel. Quilotoa costs USD$50 and Cotopaxi normally cost $55. As there were only three of us on the Cotopaxi tour, it was run as a private tour and cost $80 each.

Doing the two consecutive day tours I was lucky to get the same guide both days. Omar is a Quito local who has been climbing mountains and going on outdoor adventures since he could walk. He is extremely knowledgeable about the area, has a passion for adventure and has a good sense of humour; being on tour with him was a blast! 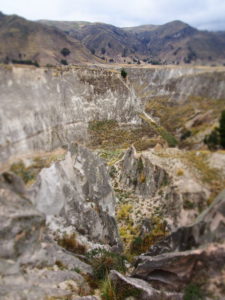 On the way out to Quilotoa we made a brief stop at the small town of Pujili to check out the local market and grab some breakfast. Continuing on, the drive to Quilotoa through the “Avenue of the Volcanoes” was spectacular to see. In addition to the mountains, volcanos and canyons is the Toachi River Canyon, which may or may not be a fault line. It was a beautiful spot to snap a few photos.

Quilotoa used to be a full volcano, reaching a height of 5900metres. The story I heard regarding the origin of the name are that it is derived from the Indigenous Quechua/Kichwa terms Quilo and Toa. Quilo means teeth and Toa was the name of a regional princess. So I guess it is the Princess’ Teeth, or something along those lines.

The volcano itself collapsed approximately 800 years ago, whether it received the name Quilotoa before or after the collapse I am unsure, though to me it would seem more fitting after due to the jagged teeth of the remaining caldera.

At this point in time the crater walls are at an altitude of 3935 metres, and the lake within the crater walls is at 3521 metres, a variation of 414 metres for the eager hikers to hike down and climb back up. The rim of the crater has an 11 kilometre diameter, where the lake surface has a 3.5 kilometre diameter.  The water is roughly 150 metres deep at the deepest point, and is a super chilly 12 degree temperature. I believe swimming is not officially permitted but is regularly done, however if you want to get out into the lake then kayak rental is a recommended option. 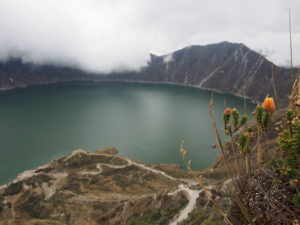 On arrival at the crater, Omar gave everyone on the tour some suggestions for how to spend their time at the crater.  Based on my fitness and interests, he had a challenging suggestion for me. Together the two of us ran down the main path to the lakeside viewpoint, we took some photos before running along the lake’s edge for a stretch, before a very steep ascent (I admit, some of this was a piggy back ride for me!), we finished the loop by walking along the crater rim back to the starting point. (GPS record of my small Quilotoa Loop)

I really wish I had the time to hike the full crater loop and explore the nearby region, because it really is a beautiful part of the world. However, with my time constraints, I am simply grateful to have had the opportunity to see this stunning natural wonder with my own eyes.

Cotopaxi is an active volcano in the region, it closes regularly due to volcanic activity, but I was lucky to visit soon after it had been reopened. 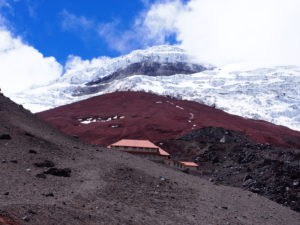 Again the name is said to be from the Quechua/Kichwa terms Coto and Paxi. Coto means neck and Paxi means moon. Once per year, at full moon, the moon appears to rest on the top of the volcano.

Cotopaxi is 5987 metres high, and is said to be one of the highest active volcanoes in the world. We drove to the car park at 4600 metres and then hiked to the refuge at 4864 meters. With a flu and hiking at altitude, I admit I moved very slowly (GPS Record of my ascent)!

The landscape was spectacular, walking through the dusty fine ash, seeing the haphazardly positioned volcanic rocks and the the snow-capped volcano peak.  Surprisingly the colours were quite vibrant, the grey and red of the volcano contrasted against the bright white snow and occasionally crystal blue sky.

I enjoyed quite some time sitting at the refuge, enjoying some Ecuadorian maracuya (passionfruit) flavoured chocolate, breathing in the mountain air and just soaking up the stunning surroundings. 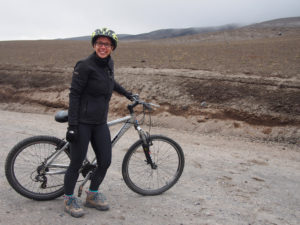 Eventually it was time to go, I took a last look at the majestic Cotopaxi before running back down through the ash to the car.

We drove a short stretch, passing the worst parts of the rough road, before jumping on mountain bikes to cycle down to the lagoon. I enjoyed riding for a short while before I hit a soft patch of dirt and fell off my bike at low speed. I scratched up my hands and knees, but with my general flu, exhaustion and inclination to pass out any time there’s blood involved, I barely managed to get myself off the road before I passed out. Omar the ever gracious guide, managed to bundle me up into the car, patch my wounds and at my request, left me there to sleep for the drive home.

My two days of volcano visits were absolutely fantastic, and I look forward to seeing and hiking more some day!