Our last morning in Sandakan was a reasonably early start. We headed to the airport for an 0830am flight to Kota Kinabalu, where we sat, had coffee and wrote postcards until our flight to Brunei at 1230pm.
We arrived in Brunei and took at taxi to our hotel: The Empire Hotel.
The Empire Hotel is one of the world’s few 7-star hotels. It was originally built as lodging for guests of the Royal Family. As construction costs exceeded US$1.1billion, it was quickly transformed into a fancy hotel to regain some of the costs. Some crazy facts about the hotel: all bathrooms are clad in 20mm thick marble slabs; the nine swimming pools use 12,285,000 litres of water to be filled; the carpets are all hand tufted and made from the finest New Zealand wool; many of the gold fittings have a 21K gold-plated finish; only the best marble from Italy was used; and the furniture is mostly from France and Italy.
So we checked in to our fancy-pants room and took turns taking flying leaps onto the ENORMOUS bed (a bit annoyingly they gave us a king sized bed instead of twin beds – but considering how big the bed was, it wasn’t an issue). After checking out every aspect of the room, we put on our togs and headed to one of the swimming pools. We went to the main pool, with an infinity edge and view of the ocean. Poolside we settled into sun loungers (we had one each and they were about 2mX2m) for some sunshine and reading. As we started to get thirsty we jumped into the pool and swam up to the poolside bar for some Mocktails, or as I like to call them, Juicetails (Brunei is an alcohol free country…so no poolside cocktails for us!)
After a few hours by the pool we headed back to the room to shower and change before heading to the Spa for our Balinese massages (since we were splurging on this crazy fancy hotel, we splurged by getting the spa package which included breakfast and massages in the room price). Considering the grounds are 180hectares we needed a golf buggy to drive us to the spa!
The massage was phenomenal and I didn’t want it to stop!!! But as we know all good things come to an end, so the staff called us a buggy to take us to the restaurant of our choice, where we had a brilliant Chinese meal. Then it was time for bed…seriously the bed was so big, we could have both slept in a starfish position and still not bumped each other!!
Day 14 – Brunei
After the comfiest night so far, we got up at a reasonable time and started the day with a swim in the Lagoon Pool, which was basically directly outside our room.
After our morning exercise it was time to replenish our energy supplies with a massive buffet breakfast and… .normal(ish) coffee!
Knowing we hadn’t seen any of Brunei itself we organised an afternoon tour before wandering more of the grounds of the hotel. It was so hot wandering around outside, that after a while we had to head back indoors for another Juicetail (I had an Empire Martini) and a macaron.
At 1330pm our guide, Zul, collected us to head into Bandar Seri Begawan, where he pointed out all the important sights as we drove through. The dome things at the top of all the mosques are made of 24K gold imported from Australia!!!!!! Crazy!!!! And then the river flows through the city and on the other side of the river to the mosques are crappy, run down stilt houses; such a contrast!
We hopped in our water taxi and headed across the river to Kampong Ayer which is the general name for the water village. Within the water village however, are various communities, and each community has a different name for their region of the water village. We zoofed up and down the river and amongst the houses, before hopping out of the boat to wander the ‘streets’ (wooden walkways) of the village. It was pretty interesting to see the contrast between the new government housing and the older houses. As you may expect, the older house have much more character! It was pretty cool to wander around and look at these places and how people live. Something I learned was that Brunei has a monarchy and one of the rules is that every house must display a photograph of the current Sultan and next to it a photograph of his wife.
Pretty soon, the tour was over and we had to make tracks to the airport for a flight back to Kota Kinabalu (unfortunately there weren’t any direct flights to our actual destination of Mulu, so we need to go via KK, spend the night there and then fly out to Mulu in the morning)
Perhaps I should start looking for a husband who could support a lavish lifestyle….since I LOVED staying in that fancy hotel!!! 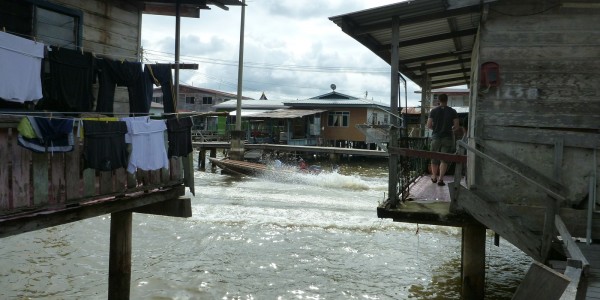 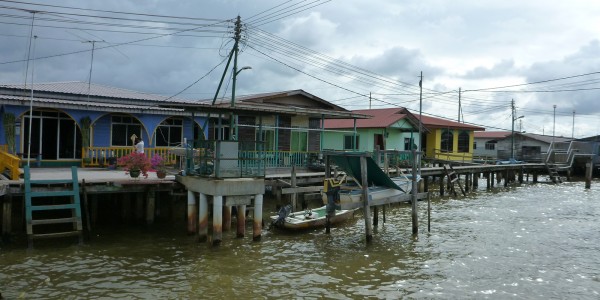 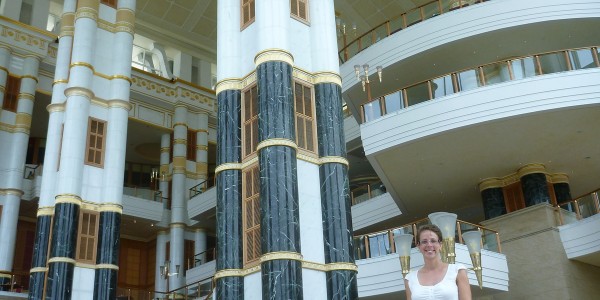 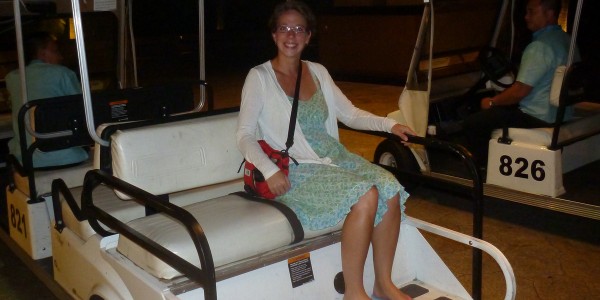 Using the buggy to get from place to place 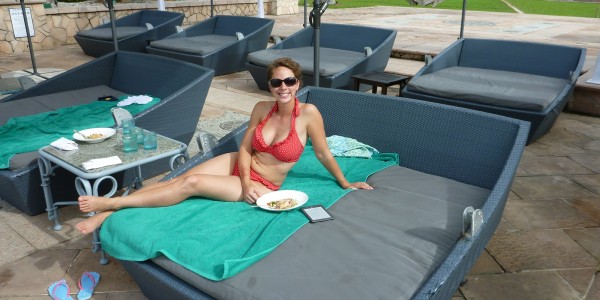 Eating lunch by the pool 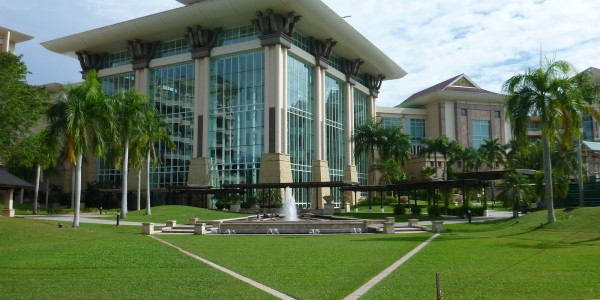